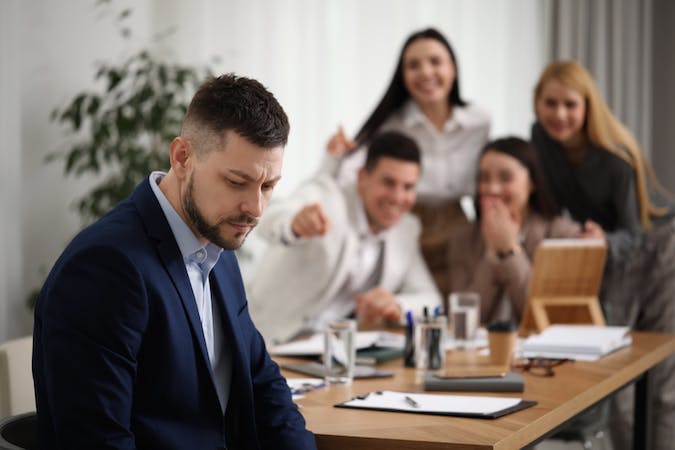 With deadlines to meet and projects to juggle, it's easy for tempers to flare in the workplace. Unfortunately, when these disputes erupt into full-blown conflict, they can quickly spiral out of control. Bullying behaviors can create a toxic work environment that jeopardizes occupational health, safety, and productivity.

While it's not always easy to identify workplace bullying, some signs can clue you in. If you're worried that your workplace might be a hostile environment, read on for some tips on how to spot bullying and how to protect employees.

According to the Workplace Bullying Institute, 30% of adult Americans are bullied at work. [1] Workplace bullying is a persistent pattern of mistreatment from others in the workplace that causes either emotional or physical harm. It can involve such tactics as verbal, nonverbal, psychological, physical abuse, and even sabotage that prevents work from getting done.

Workplace bullying can come from bosses, co-workers, or even customers. It can occur in face-to-face interactions or through technology such as email or social media.

While workplace bullying is not technically illegal, it can create a toxic work environment and lead to claims of discrimination or harassment.

What Causes Bullying in the Workplace

Workplace bullying is a serious problem that can hurt employee morale, productivity, and even physical health. Although there is no single cause of workplace bullying, there are several factors that can contribute to its development:

How to Identify Bullying and Harassment in the Workplace

Many forms of bullying and harassment can take place in the workplace. It can be difficult to identify these behaviors, especially if you are not familiar with what to look for.

Signs of Bullying in the Workplace

There are a few telltale signs that something is gossip. First, gossip is usually about someone who is not present. This allows the person spreading the gossip to say whatever they want without having to worry about being called out on it. Second, gossip is often based on rumors or secondhand information, rather than facts. If you're hearing something from someone who wasn't there themselves, likely, they're just repeating what they've heard, and it may not be true. Finally, gossip often has a negative slant to it. If someone is sharing information that makes another person look bad, chances are it is gossip.

Disrespect at work takes many forms. It could be something as simple as talking over someone in a meeting, or interrupting them when they are trying to speak. It could also be something more subtle, like not respecting someone's time by regularly canceling meetings or appointments, or not respecting their opinion by disregarding their input altogether. In addition, you can disrespect some by violating their emotional boundaries which involves talking about sensitive topics without consent or sharing confidential information.

Exclusion in the workplace can take many forms. It can be as overt as discrimination based on race, gender, or age, or it can be more subtle, such as excluding someone from important meetings or social events. Exclusion can also occur when an individual is repeatedly passed over for promotions or given assignments that are outside of their area of expertise. Another example of exclusion occurs when an employee is subject to different rules or standards than others in the workplace.

The anonymity of the internet can make it easier for people to bully others without consequence. For example, an employee may be the target of hateful or threatening comments on social media. Or, an employee may receive harassing emails or text messages. In some cases, cyberbullying can even lead to doxxing, which is when an individual's personal information is made publicly available online. It can be more subtle, such as when someone is excluded from email threads or left out of important meetings.

Workplace violence can take many forms, but physical violence is the most extreme and visible type of workplace violence. It can range from offensive physical contact, like pushing or shoving, to more serious assaults, like hitting, kicking, or using a weapon. Violence in the workplace can cause physical and emotional damage to employees. Physical symptoms of violence may include bruises, cuts, or broken bones. Emotional effects can be just as severe and may include anxiety, depression, and post-traumatic stress disorder.

Workplace sexual harassment can be defined as unwelcome verbal, physical, or visual conduct of a sexual nature that is offensive or potentially offensive to an individual. Some common examples of workplace sexual harassment include unwanted sexual advances, comments or jokes of a sexual nature, displaying sexually explicit images, and making lewd gestures.

Who Are the Targets of Workplace Bullying?

Anyone can be bullied at work, but those most often impacted are employees who are perceived as different in some way. Some of the characteristics of an employee who may be a target of workplace bullying include race, gender, age, religion, disability, sexual orientation, personality traits, and so on.

People who are shy or introverted

Introverts and shy individuals may be perceived as weak or easy targets. Additionally, they may be less likely to speak up for themselves or to defend themselves against bullies. This can leave them feeling isolated and alone. Shy people may also be less likely to develop strong relationships with co-workers, which can make them more susceptible to bullying.

People who are ambitious or hard-working

One theory is that these individuals are seen as a threat to the bully's position within the company. Another assumption could be that bullies are intimidated by people who are more successful than them, and so they try to bring them down to feel better about themselves.

People who are struggling to cope with stress

Increased stress may cause workers to appear frazzled or overwhelmed, which can make them an easy target for bullies. Additionally, bullies may see someone who is struggling to cope with stress as someone who is not performing up to par. This can lead to the bully feeling threatened or concerned that their own job may be in jeopardy.

Unfortunately, women are disproportionately likely to be targeted by bullies. Women are often seen as easy targets because they are less likely to fight back. In addition, women may be more likely to report incidents of bullying, which could lead to them being targeted more often.

Many LGBTQ+ individuals feel they have to hide their identity in the workplace out of fear of discrimination. This can make them easy targets for bullies, who may see them as vulnerable. Additionally, LGBTQ+ workers often face microaggressions from their colleagues, such as being misgendered or having their pronouns ignored. Finally, workplace bullies may target LGBTQ+ employees in an attempt to prove their own heterosexual gender identity.

Not knowing the ropes of the work setting, newly hired employees may unwittingly violate an unspoken rule or practice. This situation can open them up to criticism or unfair treatment from co-workers. Additionally, new employees may not yet have established strong relationships within the workplace, making them more vulnerable to bullies. Those who are in positions of authority may also target new employees to assert their dominance over the workplace.

Employees with chronic health conditions may need to take more time off for doctor's appointments or to recover from treatments. This can lead to feelings of envy among coworkers who view the time off as an unfair privilege. Furthermore, some coworkers may simply be uncomfortable around employees with disabilities or chronic health conditions. This discomfort can lead to discriminatory behavior, such as name-calling or intentional exclusion from company activities.

Here we list a couple of famous workplace bullying cases to illustrate the issue.

Andrew Cuomo is an American lawyer and politician who served as the governor of New York from 2011 to 2021. In 2021, Cuomo resigned from office following numerous allegations of sexual misconduct. At the time of his resignation, he was the longest-serving governor in the United States.

Cuomo was exposed in an investigative report as a man who used his powerful position to sexually harass female workers who were half his age — including touching their private body parts without them consenting to it.

179 witnesses were interviewed, including Cuomo — and a long report, with more than 450 pages of evidence with hand-written notes, text messages, and e-mails that documented the governor’s inappropriate behavior was released. The report demonstrated that Cuomo retaliated against his victims and created a hostile environment for his female workers.

Despite the mountain of evidence, all the sex-crime inquiries against Gov. Cuomo were dropped in 2022 due to insufficient legal grounds to bring criminal charges. 2,3

The Duchess of Sussex is facing allegations of bullying after reports emerged that she mistreated staff during her time as a working member of the royal family. The investigation was done by an independent law firm and was funded by Queen Elizabeth.

The reports allege that Markle was highly critical of her staff, frequently made unreasonable demands, and was quick to anger. Two personal assistants claimed that they felt "broken" and terrified" by the cruelty of Markle and were driven away, and the third employee felt undermined by Markle.

Buckingham Palace has revealed that the findings of the investigation will remain private, however, "the lessons have been learned” and its HR policies were adjusted. However, Markle has heavily denied the allegations, saying that she is "saddened" by them and citing that she has taken a stand against bullying since her own experience of it within the media. 4

How to Not Be a Target of Workplace Bullying

While it can be difficult to protect yourself from bullies, there are certain steps you can take to prevent workplace bullying and reduce your risk of being targeted:

Why Is Workplace Bullying Hard to Detect?

Workplace bullying is a difficult problem to detect for several reasons:

Workplace bullying is a common problem that can have serious consequences for both employees and employers. Despite this, many people choose to ignore the issue or downplay its importance. There are many reasons why this may be the case: