8 Forms of Discrimination in the Workplace 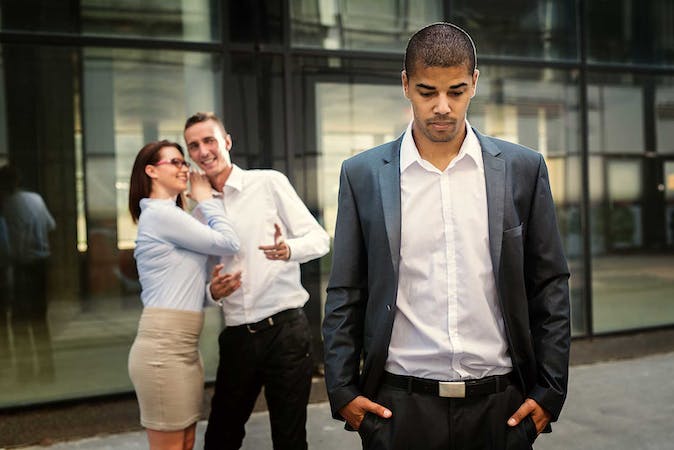 Workplace discrimination comes in many shapes and sizes. Sometimes, it's easy to identify, while other times it can be more challenging to spot. In order to help protect employees from discrimination in the workplace, it's essential to be aware of the different types that exist. Here we'll discuss the eight most common types of discrimination and provide examples of how they can play out in the workplace.

How Is Discrimination in the Workplace Determined?

Workplace discrimination can occur for many different reasons. Race, age, gender, sexual orientation, pregnancy, and ability are just some personal characteristics that could lead to individuals receiving unfair treatment compared to others in their organization.

Discrimination can occur when an individual is hired, promoted, or fired. It can also occur in the form of unequal pay or benefits, or when someone is harassed or treated unfairly because of their protected status. It can have a profound effect on an individual's career and earning potential.

For example, if an employer refuses to hire female qualified job candidates because they are pregnant, this would be direct discrimination. The Equal Employment Opportunity Commission in the US describes pregnancy discrimination as discriminatory practices against a pregnant employee because of her pregnancy, childbirth, or medical conditions related to it.

If employees, such as pregnant women, feel that they are being deprived of job opportunities, it is important to know that such direct discrimination is illegal. Pregnancy Discrimination Act in the US prohibits discrimination based on pregnancy when it concerns selecting job applicants, hiring, promoting, handing out job assignments, training, or firing them.

Visit our blog post to learn more about Direct Discrimination in the Workplace.

Discrimination that is not obvious may be referred to as indirect. It occurs when a practice, policy, or rule seems neutral but has a disproportionately negative impact on a particular group. For example, an office dress code that requires all employees to wear business attire may seem fair on its face. However, if the only people who can afford to comply with the dress code are wealthy, then the dress code has an indirect discriminatory effect.

Visit our blog post to learn more about Indirect Discrimination in the Workplace.

Workplace harassment is one of the most common and damaging forms of discrimination. It can include any type of unwelcome or hostile behavior, whether it is based on race, marital status, sexual orientation, religion, mental disability, or any other characteristic. Workplace harassment can take many forms, from bullying to sexual harassment.

For example, workers with disabilities often report having experienced workplace harassment due to the misguided belief that they are somehow weaker or less capable than their non-disabled counterparts. This can include being passed over for promotions or experiencing threats. Even offhand jokes about disabled workers could be taken as harassment if the jokes are perceived as demeaning or insulting.

Luckily, there are laws in place to protect harassed workers. For example, the Disabilities Act is a federal law that prohibits disability discrimination against disabled workers in all areas of public life, including jobs. This federal legislation protects employees with disabilities against harassment, so it is important for employers to be aware of the unique challenges disabled persons may face.

Victimization at work occurs when an individual is treated unfairly or harassed because they have made a complaint or raised concerns about equal employment opportunities in their workplace.

An example of workplace victimization could be an employer giving a warning or dismissing an employee for witnessing or speaking up about a complaint of workplace discrimination. If a female colleague gets paid less than male employees, it constitutes gender discrimination. If another colleague speaks up about it and is being treated unfairly because of it, he or she is being victimized.

There are ways employees can battle victimization. The Government of South Australia states that victimization is unlawful and to treat people unfairly because they have used equal opportunity laws is illegal. This is because it stops people from speaking out and helping others who are experiencing unfair treatment. Employees should know their rights and take legal action if necessary.

Visit our blog post to learn more about Victimization in the Workplace.

Intentional employment discrimination is the conscious and deliberate treatment of people differently based on race, ethnicity, national origin, religion, sex, or disability in the workplace.

For example, employers may intentionally discriminate against job applicants who are not members of a certain protected class, such as race. A manager who is creating a toxic work environment by encouraging racial slurs and making derogatory comments or symbols about certain races constitutes intentional racial discrimination.

Unintentional workplace discrimination can occur when employers or employees inadvertently create policies or a working environment that is unfavorable to members of a protected group.

For example, a company may have hiring practices where only people with a certain level of experience are accepted. This can unintentionally discriminate against recent graduates or employees who have been out of work for an extended period of time. This can also constitute age discrimination.

Another common cause of unintentional workplace discrimination is when employees are evaluated based on personal characteristics that are not job-related. For example, a manager may give preference to employees who share the same political views or who are members of the same social club. This can lead to unfair treatment and create a hostile work environment for those who don’t fit the mold.

Systemic workplace discrimination refers to parts of organizational structure, such as behavior patterns, policies, and practices that create and perpetuate disadvantages for members based on their gender, race, religious practices, and so on.

One common example of systemic religious discrimination at work occurs when an employer imposes dress or grooming requirements that conflict with an employee's sincere commitment to his/her religion. For instance, an Orthodox Jewish employee may be required to wear a yarmulke or head covering as part of their religion, but if their employer has a "no hats" policy, this could be considered systemic religious discrimination.

The EEOC defines systemic discrimination as any “pattern or practice, policy and/or class cases where the discrimination has a broad impact on an industry, profession, company or geographic location." Organizations should be aware that systemic employment discrimination is illegal.

The takeaway is that there are many ways to discriminate against employees, and all of them need to be taken seriously. What can your organization do to ensure that it’s not guilty of any type of discrimination? Review your policies, make sure you have an effective reporting system in place, and educate yourself and your employees on what constitutes workplace discrimination.