Examples of Bullying in the Workplace 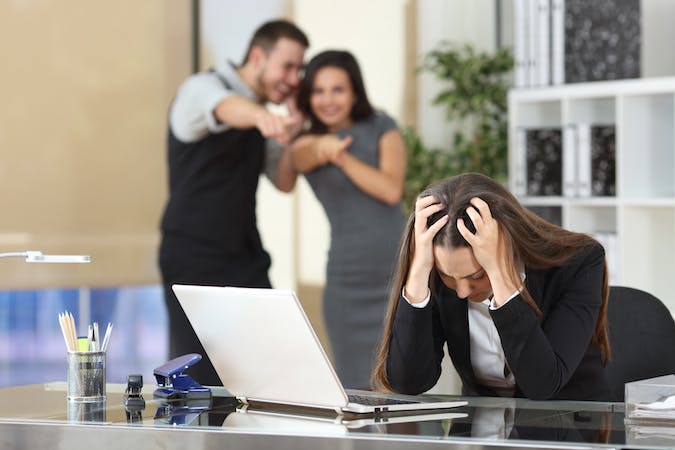 There are all sorts of interactions that take place between coworkers. Unfortunately, sometimes these can turn sour, and bullying issues occur in many workplaces. This can be very damaging to the individuals being bullied, the employers, and the company as a whole. In this article, we'll provide some examples of bullying in the workplace, so that managers are aware of how to protect employees from it.

Workplace bullying is a persistent pattern of harmful behavior directed at an individual employee or group of employees. It can take many forms, such as verbal abuse, offensive conduct (including nonverbal behaviors), and work interference. Bullying can occur in person or electronically. It is considered violence and has three key characteristics: it is intentional, repeated, and involves a misuse of power.

According to a recent report by Workplace Bullying Institute, 30% of American workers and 43% of remote employees are bullied at work. Individuals tend to bully employees of the same sex, and 67% of bullies are men. 47% of all bullies were found to be a single individual, usually a higher ranking employee than the target, or a boss. [1]

Bullying at work is a problem that can have a negative impact on both individual employees and the overall company. While there is no one-size-fits-all definition of it, there are some common signs that can be indicative of bullying behavior.

One common tactic of bullies is withholding information. At work, this can manifest in a number of ways, such as refusing to share important updates or removing pertinent documents from shared drive folders. In some cases, a bully who is withholding information may do so intentionally, in an effort to sabotage their colleagues. In other cases, they may simply be trying to hoard power or make themselves feel more important.

This type of harassment is often seen in managerial positions, where an individual may use their power to threaten employees with reduced hours as a way to control them. In some cases, this threat may be empty, but in others, it may be carried out if the employee does not comply with the bully's demands.

This is when someone in a position of authority speaks down to an employee or criticizes their work in a public setting. While constructive feedback is essential for growth, belittling comments are designed to make the person feel small and unimportant and can affect an employee's work significantly.

Have you ever been left out of a work project or social event? Maybe you were the last to know about an important change in the company policy? Exclusion can also involve more subtle actions, such as making it clear that someone is not welcome in a particular area of the office.

This can take many forms, from being berated in front of co-workers to having one's errors broadcasted via a company-wide email. Working remotely puts you at a larger risk of being humiliated online - according to an above-mentioned report, 35% of remote cases happen during Zoom or Skype video conferences when the target's facial expressions are made prominent by the technology and made fun of.

Have you ever been in a meeting where you're trying to make a point and somebody talked over you, or you made a suggestion and it was quickly dismissed? It's frustrating when you feel like you're not important or someone is taking credit for your work. However, if it happens systemically, it's considered to be a form of harassment.

Physical abuse at work is not always easy to identify. In some cases, it may be subtle, such as a coworker repeatedly invading your personal space. In other cases, it may be a more overt health-harming mistreatment, such as a supervisor pinning you against a wall or physically restraining you from leaving a room. Another example of physical abuse that can take place in the workplace is sexual harassment.

Sabotage at work occurs when an employee intentionally damages work equipment or property. This can range from small acts, like deliberately spilling coffee on a computer keyboard, to more serious offences, like starting a fire in the office. Sabotage can also take the form of online activity, such as sharing confidential company information on social media or deleting important files from the employee handbook or the company server.

One of the most common and potentially harmful things bullies can do is shout. When someone is shouted at, it can be very difficult to remain calm and constructive. The natural reaction is often to shout back or to withdraw completely, neither of which is likely to be helpful in resolving the situation.

Such treatment is a passive-aggressive way of dealing with conflict. It involves withholding verbal and nonverbal communication from someone with whom you're upset. The goal is to make the other person feel uncomfortable or unworthy of your attention. In the workplace, silent treatment can be especially harmful because it's a way of shirking responsibility and stifling productivity.

It's no secret that the workplace can be a hotbed of gossip. From watercooler chat to after-work drinks, rumors often start circulating about everything from upcoming layoffs to who's dating whom. While some people may enjoy being the office gossip, spreading rumors can be dangerous and destructive. Not only can it create a hostile and toxic environment, but it can also lead to false assumptions and even legal problems.

Is a joke at work considered workplace bullying?

It depends on the relationship between the person telling the joke and the person they are telling it to and the content of the joke - so it is important to consider the company culture as a whole. For example, if joking around is generally accepted and encouraged in the office, then a single joke is unlikely to be considered bullying. However, if the workplace culture is generally more formal and jokes are not common, then a joke could be seen as out of place and, potentially, harassment.

Is an angry encounter at work considered bullying at work?

Bullying is any repeated and unwanted abusive conduct that is intended to harm, intimidate, or humiliate an individual. An angry encounter at work could be considered bullying if it meets these criteria. However, not all conflict at work constitutes harassment. For example, a single instance of raised voices does not necessarily mean that someone is being bullied.

While it's true that bad scheduling can negatively affect an employee's work performance, it's important to remember that in many cases it's not done with the intention of causing harm. More often than not, constantly changing the schedule or work guidelines results from poor planning or miscommunication. As such, bullying at work requires a pattern of intentional and repeated behavior that is designed to harm or control the victim.

Unfortunately, in the above-mentioned report, it was found that abusive conduct was in most cases put to an end when the target left the position, rather than when the perpetrator was punished (23% of all bullying cases, compared to 11% of cases). This shows that there is still a long way to go in learning how to effectively deal with harassment at work.