11 Types of Discrimination in the Workplace 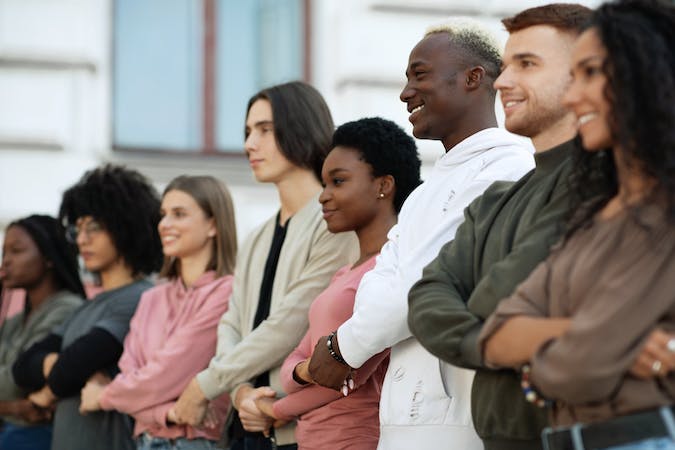 What Is Workplace Discrimination?

A person is not being hired because they are black, Asian, or Hispanic. An employee has an accent that, in the words of an employer, 'reflects badly on an organization.' A manager expresses certain expectations about how women should dress in the workplace. All of these occurrences have something in common - they all constitute workplace discrimination.

In short, workplace discrimination means that an employee is treated not as favorably because of their personal characteristics - age, gender identity, marital status, ability, religious beliefs, and so on. Discrimination can be intentional or unintentional, but in all cases, it harms the individual that's discriminated against and the organization as a whole.

What Are the Main Types of Discrimination in the Workplace?

Causes of discrimination in the workplace include lack of awareness, having a workplace culture that values certain characteristics over others, or as a result of personal bias. This may be conscious or unconscious, but it can result in individuals being treated differently based on their personal characteristics. Discrimination is a complex issue, but knowing the main types of it can help to prevent it from occurring in the first place. Here are the 11 most common types of discrimination at work.

Ageism is defined as discrimination against a person or group of people based on their age. Such discrimination can rear its ugly head in many places, including the workplace. This type of employment discrimination can take many forms, from having an age preference in an organization to making jokes and comments about someone's age or refusing to promote someone because they are 'too old.'

Ageism at work could be illustrated through an example where a senior editor is passed over for a promotion in favor of a younger, less experienced candidate. The editor has been with the company for many years and has made significant contributions to the publication. However, her experience and knowledge are not enough to overcome the stereotype that older workers are less capable than their younger counterparts.

Situations like these can cause older candidates to be deprived of job opportunities, despite being more qualified job candidates. Employees should be aware that The Age Discrimination in Employment Act lists ageism at work as unlawful discrimination, so individuals have a right to file discrimination claims if they have experienced discrimination.

Workplace gender discriminatory practices can take many different forms. It can be evident in the fact that women are denied job and internship opportunities, or in the way that they are considered for jobs that are traditionally seen as being 'men’s work.' It can also be seen in the way that women are sexualized or treated as objects in the workplace.

One example of sexism at work is when an employer judges job applicants based on gender stereotypes. For instance, a construction company may automatically consider a female job applicant for an administrative job, instead of asking her if she wanted to apply for work on the construction site. This not only limits the opportunities for women to learn new skills and advance their careers but also reinforces the idea that women are not capable of performing manual labor.

While sexism has historically been a problem for women in the workplace, it can also affect men. Men can be victims of sexual harassment and gender discrimination just as women can. They may experience different forms of sexism, such as being passed over for promotions or being given less challenging assignments. Employees should be aware that according to the Civil Rights Act, discrimination on the basis of gender is illegal and the Equal Pay Act prohibits paying an unequal wage to men and women.

Discrimination of pregnant women at work is a serious problem that can have a lasting impact on women and their families. Although they are protected by federal laws, such as the Pregnancy Discrimination Act, many employers still discriminate against them. This can include making decisions about hiring, promotions, or job assignments based on pregnancy status.

Additionally, some employers may try to force pregnant women to take leave, reduce their hours or quit their jobs. Such discrimination is not only illegal, but it also creates an unfair playing field for women who are trying to balance work and family responsibilities.

According to research, nearly 1 in 4 women report experiencing some form of pregnancy discrimination at work during the pandemic in 2020. This problem is compounded by the fact that many pregnant women are already under immense pressure at work, as they try to balance their duties as employees with their responsibilities as mothers.

Unfortunately, it is all too common for employers to discriminate against employees who are parents, whether it is in the hiring practices or in terms of promoting and giving raises. In some cases, parents may even be fired simply because they have children.

This type of discrimination can be very difficult to prove, however, federal employment law in the US prohibits discrimination against an employee because they are a parent.

There is a lot of discrimination that takes place in the workforce against employees of a lower social class. Many employers feel that a working-class job candidate might not be as competent or capable as those from a higher social class. They may also believe that such employees are more likely to be disruptive or to cause problems. Additionally, employers may simply feel more comfortable with employees who are from a similar social background.

Other employers may discriminate against workers from lower socio-economic backgrounds by treating them with less respect or paying them lower wages. A recent study showed that even when working-class employees enter professional occupations, they earn around 17% less than their colleagues of a higher social class.

If left unchecked, social class discrimination can create an environment of inequity and resentment that can ultimately lead to decreased productivity and profitability. As of 2022, classism, or discrimination because of one's social class is not unlawful in the UK, however, there are ongoing debates about whether social class should be added to the list of protected characteristics under the Equality Act.

Employment discrimination due to the disability status at work is a serious issue that can have a profound impact on an individual's ability to earn a living. According to the Equal Employment Opportunity Commission (EEOC) and the Disabilities Act, it is unlawful for an employer to discriminate against an employee or applicant with a disability.

For instance, if disabled workers need a modified work schedule or a different office set-up in order to do their job effectively, and the employer refuses to make those changes, that would be considered disability discrimination. Another common example of disability discrimination at work is when an employer gives preference to able-bodied employees or imposes stricter performance requirements on employees with disabilities.

This can leave disabled employees feeling isolated and powerless, and it can make it difficult for them to advance in their careers. In such cases, employees may be able to file EEOC complaints or take legal action against their employer.

Body shaming is a rampant problem in the workplace. Unfortunately, many people feel that they can't speak up about body shaming for fear of reprisal from their employers. As a result, the problem often goes unchecked. The thought of body shaming at work is nauseating, but it happens all too often.

Unfortunately, hiring people and depriving people of employment opportunities based on their appearance, is not considered unlawful discrimination. However, body shaming is a form of harassment, which if persistent, is illegal under federal law in the US.

Religion-based discrimination occurs when an employee is treated differently from other employees because of their religion. Such discrimination can occur when an employer requires employees to stop following certain religious practices, such as attending religious ceremonies or stopping praying at certain times. Some employers may impose dress or grooming standards that oppose individuals' spiritual beliefs.

There is no easy answer to this, and the issue remains highly controversial. Such discrimination, however, is unlawful in many countries, and employees who feel that they have been the victim of discrimination based on religion can find relevant federal legislation and file a complaint with the Equal Employment Opportunity Commission.

Color discrimination in the workplace is a longstanding problem that continues to persist despite efforts to address it. Employees of color often face barriers to advancement and opportunities for growth, and they may be subject to disparate treatment in areas like compensation, benefits, and job assignments.

According to a recent study, 35% of African Americans in the US had experienced race discrimination at work, compared to only 7% of whites. This disparity is also pronounced when looking at equal pay. Black and Hispanic workers are paid less than white workers at almost every level of education. Black workers with advanced degrees earned 82.4% of the wages that white workers with advanced degrees earned in 2019. They are also more than twice as likely to say that they have been subjected to racial harassment at work.

The workers should know that if they are being discriminated against in terms of equal pay, Title VII of the Civil Rights Act prohibits wage and other discrimination on the basis of race, color, religion, sex, or national origin.

All employees should be judged on their work performance, not on their personal lives. Unfortunately, this is not always the case, and workers who are perceived to be part of the LGBTQ community often face discrimination in the workplace. This can take many forms, from being passed over for promotions to being harassed by co-workers. In extreme cases, LGBTQ employees may even be fired simply because of their sexual orientation.

For example, an employee receiving unfair treatment, such as being assigned to a less desirable shift because of their sexual orientation is considered discrimination. Another example could be an employee who is the target of derogatory comments or jokes based on their orientation.

The Equality Act in the UK states that individuals mustn't be discriminated against because they are gay, lesbian, bisexual, or heterosexual. Employees must be aware of the fact they should be provided equal work opportunities and equal pay, despite their race, color, religion, sex, or orientation.

National origin discrimination can take many forms in the workplace. In some cases, an individual may be purposefully excluded from company social events or treated differently by co-workers. Cultural discrimination can also manifest in more subtle ways, such as microaggressions or assumptions about an individual's abilities or interests.

In the United Kingdom, national origin discrimination at work is a serious issue. Employees from minority groups are often treated unfairly and paid less than their colleagues. A recent study showed that applicants from the EU were less likely to receive a callback from an employer after an interview than were white British job seekers, especially in Brexit-voting areas.

What Is the Most Common Type of Workplace Discrimination?

According to the EEOC, the most common type of workplace discrimination for the 18th year in a row is retaliation, comprising 53.8% of all discrimination cases in the US. Retaliation at work may occur due to reporting a crime or a breach of standards, opposing bad treatment of someone, or complaining about sexual harassment. Sadly, standing up to discrimination creates more of it.

Since retaliation seems to be the number one type of workplace harassment, organizations should take action and take steps to stop retaliation at work. There are several ways to do this, such as finding out the causes of discrimination in the workplace, creating policies that prohibit retaliation, and training employees on how to identify and report instances of retaliation. Additionally, managers should take complaints of retaliation seriously and investigate them promptly. By taking these steps, managers can help to create safe and equal work conditions.