Age Discrimination (Ageism) in the Workplace 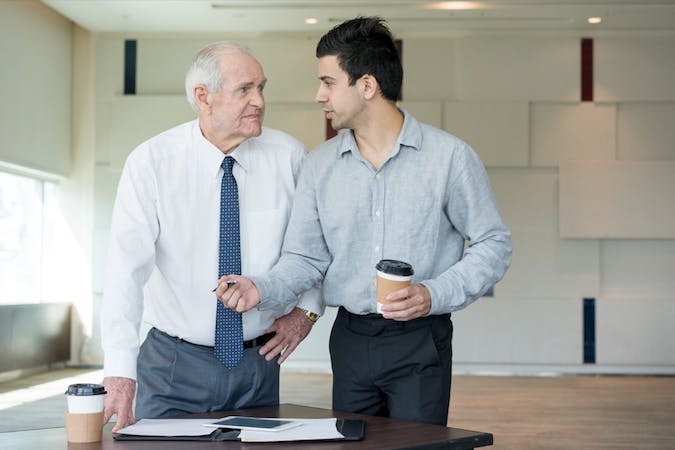 From "OK Boomer" to "Millennials expect free food and beanbags"... we've all heard heated terms about each generation, including how they perform in the workplace.

Sometimes, this takes the form of lighthearted satire meant to simply take a humorous look at the vast differences between generations. However, in some cases, negative age stereotypes can harmfully affect employment decisions. In such cases, this is classed as age-based discrimination and can be lawfully appealed under the employment act. Here, we'll take an in-depth look into different aspects of ageism in the workplace.

What Is Age Discrimination in the Workplace?

This kind of incident is when an employee or applicant is treated differently because of their age. Ageism is a form of discrimination that can be directed towards people of all ages. However, in terms of legally reporting such issues, discrimination is most commonly recorded against older adults. Ageism illegal in many jurisdictions, and businesses can be fined or sued for engaging in this type of discrimination.

How Does Age Discrimination Occur in the Workplace?

Age discrimination can affect people at any stage of the employment process, from job applicants to experienced workers. Affected areas include promotions, job assignments, and even terminations. Here are some key ways it occurs in the workplace:

How Does Age Discrimination Affect the Workplace?

The Age Discrimination in Employment Act of 1967 (ADEA) legally prevents discrimination against workers aged 40 and up.2 However, two out of three workers between ages 45 and 74 say they have seen or experienced age discrimination at work.3 Here are some ways this affects employees and the company as a whole:

Common Age Stereotypes in the Workplace

Benefits of Age Diversity in the Workplace

With any type of diversity, there comes an advantage from combining perspectives and talents. Let's take a look at how age diversity benefits a workplace:

How Do You Prove Age Discrimination in the Workplace?

Age discrimination is unfair at best and can be very damaging to an individual's mental health or career. Here are some key steps to take if you feel you have been discriminated against:

How Do You Address Age Discrimination in the Workplace?

A company is responsible for ensuring age discrimination becomes a thing of the past, not just for the sake of its staff, but for its own future. Here are some ways anti-discrimination strategies can be implemented:

How Can Age Discrimination Be Prevented in the Workplace?

Can Age Discrimination Be Solved in the Workplace?

The question of whether prejudice and discrimination will ever be fully solved is a tough one to answer, but there is evidence to show the world is making great progress.

The United States government recently laid out the Executive Order on Diversity, Equity, Inclusion, and Accessibility in the Federal Workforce. This order states that federal employees should be a model of diversity for the rest of the country. The order seeks to address ageism as well as other common forms of discrimination.8

Is Some Age Discrimination Legal?

The answer to this is not simple. As explained throughout this article, in many cases, the law prohibits discrimination based on age.

However, some cases of age discrimination are legally protected, one prominent example being the US presidency. Legally, presidential candidates must be 35 years or over to take the position, even though this law hasn't changed since 1787, when the constitution was written.9 This means that in politics, there appears to be a bias toward older people. In fact, the average US president's age at inauguration during the last century was 62.3 yrs.10 In some cases, age discrimination is as ingrained within the law as it is within public thinking.

Things aren't terrible though - despite there being certain cases like the above, ageism has been very much under scrutiny over recent years and is becoming easier to challenge legally.

Is Ageism Prevalent in the Workplace?

Sadly, ageism is prevalent in most organizations, across the globe. In the UK, an organization called Stop Ageism, a recent survey revealed that 44% of respondents aged over 50 had experienced ageism in the workplace.11

In the US, the numbers are even more stark. In a recent survey, 82% of recipients aged 50 and over said they had experienced ageism in some form.12

Of course, these figures don't include ageism against young people, sometimes referred to as "reversed ageism". Due to the lack of legal protection in the US, many young people feel reluctant to share their experiences with age-based discrimination. In the UK, one survey revealed that 3/4 of participants had experienced age discrimination for being perceived as "too young".13

By definition, age discrimination can apply to persons of any age, as long as they were treated unfairly because of it. For example, if a 27-year-old was passed over for a training scheme that only recent graduates were accepted into, this could constitute age discrimination. Furthermore, a 39-year-old working with a group of politicians in their late 50s and above could be subjected to patronizing and offhand comments in discussions. This would also constitute discrimination based on age, in a technical sense.

However, legally speaking, things could be different depending on where you live. US federal law only protects those experiencing ageism who are aged 40 plus. On the other hand, since the year 2000, the UK and EU member countries have enacted law protecting all ages from discrimination of this kind.14

At What Age Are Employees Protected against Age Discrimination?

In the US, from 40 upwards. In the UK and the EU, any age is protected as long as they can provide adequate proof. However, legality doesn't necessarily equate to protection. In some cases, it can be very difficult to prove discrimination occurred, and the claimant may have further issues navigating the legal system.

What Are the Working Age Groups?

What Are Types of Ageism?

Just as with all other forms of discrimination, it can happen without intent, or due to deep-rooted cultural misunderstandings. Here are four categories to help you distinguish the different forms of ageism.

While all of these forms of ageism can be harmful, intentional ageism is perhaps the most pernicious, as it represents a conscious effort to drive older workers out of the workforce. Consequently, it is important for all employers to be aware of the potential for ageism in the workplace and to take steps to prevent it from occurring.

2 US EEOC, The Age Discrimination in Employment Act of 1967, https://www.eeoc.gov/statutes/age-discrimination-employment-act-1967

7 Stop Ageism, The Results: Ageism in the workplace survey, 2021, https://www.stopageism.org/lifestyle/the-results-ageism-in-the-workplace-survey/

10 Healthline, Do We Become Invisible As We Age? https://www.healthline.com/health/ageism-invisibility#1

15 Presidents of the USA, Average Age at Inauguration, https://presidenstory.com/stat_age.php